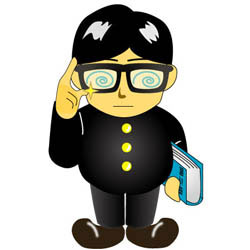 The general definition of book smart is someone who is intelligent and very well educated academically. However, the term is usually used to contrast and compare with another term known as “street smart“.

The stereotype of a book smart person is someone who is upper-class and well educated but less knowledgeable when it comes to handling important situations faced in bad neighborhoods and lower-class city areas (a.k.a. the streets).

However, the stereotype of a street smart person is someone who is intelligent and knows how to handle important situations in the streets but is not as well-educated academically.

The more extreme and negative stereotypes are that book smart people are naive, easily manipulated, and have bad judgment in bad situations, while street smart people are unintelligent and incapable of achieving a higher education.

Both stereotypes aren’t always true and any semblance of them are only due to different lifestyles and experiences.Josh: Are you sure me and Jason will get along? Jason is street smart and I’m book smart. We will probably be very different from each other.

Mike: Nah, don’t worry. Jason may be street smart but he is also book smart. I’m sure you two will have a lot in common.